Click on the Images for More Photos of Each Set!

I don't typically purchase crafted figures often, but there are some that definitely make the exception for me!
These figures sometimes encompass some of my favorite Zelda characters in ways that the licensed merchandise hasn't and that makes me a happy Linksliltri4ce!

My collection of figures will be listed from oldest to newest.

Ocarina of Time Figures by Vidalcris 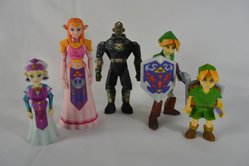